To get Username and Password for inspection, kindly send a mail to
investor.agm2020@exide.co.in

At Exide, we manufacture high-end submarine batteries conforming to the most stringent technical specifications and quality control standards.

We maintain a dedicated infrastructure with trained & skilled manpower to manufacture such specialized batteries, and one of the few battery manufacturers having the necessary capacity to manufacture submarine batteries for a wide range of submarine designs, such as Russian (Foxtrot/Romeo/ Kilo/636/Amur classes), German (209 class), French (Scorpene class) and Indigenous (Nuclear) submarines.

The company meets 100% demand of the Indian Navy with indigenous submarine batteries and also exports with permission of the Government of India. We are a rare Indian company to be successful in exporting such a critical defence product and gaining repeat orders.

Recently, we manufactured and exported two sets of submarine batteries to Algeria

and two are in the pipeline for export to Admiralty Shipyard, Russia. Our indigenous batteries for Russian submarines have been certified by the

Russian design agency 'Rubin' as compliant to their norms.

performance guarantee for the submarine batteries with upkeep & maintenance as per technical documentation. 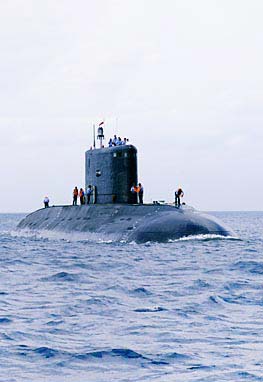 Believe it or not!

Hollander, a German World War I submarine, sank near the Eddystone Lighthouse in 1913. For the next 69 years, the submarine remained submerged underwater, until 1982 when it was taken to the H.N. Submarine Museum in England.

When inspected, to everyone's surprise, the submarine's battery (fitted in 1908) appeared in good condition! Technicians who examined it found that the cells still produced current. For a 74 year old battery (69 of which were spent under the ocean) this was a tribute to its manufacturers.

Indeed, we are the same people who make batteries for your cars and bikes.